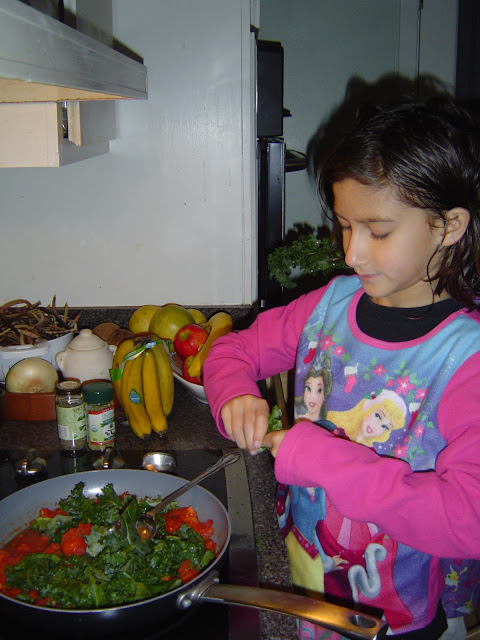 As promised, here is this week's kale recipe!  That's 2 down, only 50 more to go for this year!  Tonight, like most nights, my 8 year old helped me with cooking.  Here she is adding the kale to the soup base, which is Roma tomatoes.  This recipe is from Appetite for Reduction by Isa Moscowitz.  The original recipe calls for spinach, but I thought kale seemed like a better addition, well since I'm on a mission and all!

Bring a pot of water to a boil for the pasta.

Heat a large skillet over medium heat. Once hot saute the garlic in 2 tsp water for one minute. Add the tomatoes, broth, oregano, and salt or salt substitute.  Bring to a boil. Once boiling, add the beans and lower heat to medium. Cook until tomatoes are broken down and the sauce is reduced and thickened, about 15 minutes.

In the meantime, add the pasta to boiling water and cook according to the package directions. Once the sauce is thickened, simmer over low heat to keep warm and add kale in batches until wilted.

Drain the pasta. In a bowl, alternate adding batches of pasta and beans to the sauce, stirring with a pasta spoon to incorporate. Mix well and serve. It should look something like this... 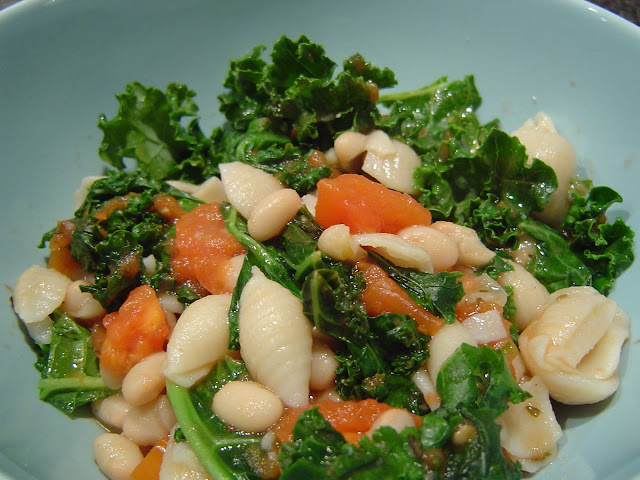 COST: Not counting spices, the total cost of the meal was $10.68!
Kale was BOGO at Publix last week (using the Greenwise ad from the internet and getting my store manager's approval), so cost was $1.50 for the pound. The beans were Eden Organic and I got them for $1.90 with a coupon. The Tinkyada was not on sale, it was $4.29.  Organic Roma Tomatoes were $2.99/lb.   And there was plenty leftover for lunch tomorrow for at least 3 extra servings!
Posted by Gretchen at 8:55 PM

I made this recipe tonight as well! I used spinach and gluten free tube pasta plus home canned tomatoes. My kids enjoyed it and there is enough left over for my work lunch tomorrow!