T. Colin Campbell speaks out Against the Meat Industry- "Animal Protein is not necessary for Optimal Health"

Last night on Larry King Live T. Colin Campbell, Professor Emeritus at Cornell University spoke out against the Meat Industry. He went on to say that Animal foods are unnecessary for human health. EVERYONE needs to be aware that Dr. Campbell's research (which can be found in The China Study and purchased on Amazon.com) proves that increasing animal foods turns on CANCER cells. We can turn the cancer cells off by significantly decreasing or removing animal protein (from all sources including beef, chicken, eggs, fish, milk and cheese) from our diet.

There is no special formula to getting enough nutrients or protein from a plant based diet. Protein needs are low (10% of calories) and our body combines the proteins to make the different amino acids.

Protect your health and your children's health by reducing animal foods to no more than 3 servings per week of animal flesh and eliminating dairy products.

Read the Transcripts to last nights show.
Posted by Gretchen at 8:43 AM 0 comments

Posted by Gretchen at 5:07 AM 0 comments

This article is so good I had to share it! Dr. Popper is founder and Director of the Wellness Forum in Ohio. I have spent a lot of hours taking classes along with the Health Educator Certification through the Wellness Forum for the past three years. I am totally on the same page with everything she is saying here. I have never had a flu shot and I'm lucky if I get the flu once every 4 or 5 years. Normally it lasts no longer than two days, so I don't see the point in injecting myself or my kids with a bunch of toxins. Our BEST defense against the Swine Flu or any other virus is high levels of Fruit and Vegetable intake (Plant Based Diets!), proper hydration (half our weight in ounces of water daily), restful sleep (8 hours daily), and stress relief (yoga practice).

In April 2009, officials from the Centers for Disease Control and the US Department of Homeland Security held a press conference and announced a public health emergency in response to a new novel Influenza A (H1N1) "swine flu" virus that was infecting people in Mexico. Within only 60 days, the World Health Organization had raised the alert level to the highest possible, indicating that there was the expectation of a worldwide pandemic.

Is there a pandemic? Are massive numbers of people getting sick and dying from the flu? We really don't know. In July the World Health Organization recommended that health care professionals stop performing laboratory tests to confirm a swine flu diagnosis and shortly after, the CDC made the same recommendation to U.S. health care professionals. Health care professionals were to assume that all people presenting with flu-like symptoms were swine flu patients. Why? The number of reported case and deaths was quite low and not indicative of an epidemic. Classifying everyone with a runny nose and fever as a swine flu patient will provide the WHO and the CDC the numbers they need in order to perpetuate the myth that there is an epidemic.

In addition to inflating the risk of contracting swine flu, the risks of complications have been grossly exaggerated. One third of adults over 60 years of age who have been tested have been found to have protective antibodies to the H1N1 flu virus. This means that this strain of flu has circulated previously and is not new, and people have contracted and recovered from it.
The majority of swine flu-related hospitalizations and deaths have occurred in people who are obese, suffering from chronic inflammatory diseases or who have diabetes, heart disease, asthma, or are pregnant. This means that as with all other diseases, those who are overweight and sick are the most vulnerable. This emphasizes the importance of practicing dietary excellence and optimal habits. People who are optimally healthy are not only less likely to get the flu, but can recover from it more quickly and without complications than those who are overweight and sick.

In addition to seasonal flu shots, the drug companies have developed a vaccine for the swine flu which is available now. Health officials are recommending that people get both shots this year.
According to the FDA, swine flu vaccines were tested for only three weeks on a few hundred children and adults. There were no tests on pregnant women because doing so would have been unethical, but pregnant women are one of the groups targeted to be vaccinated early. There also were no tests on people receiving both vaccines, which is the way most people will be vaccinated this year.

There will be two forms of the vaccine - inactivated and live. The government has ordered manufacturers to produce 193 million doses of swine flu vaccine. We therefore must have an epidemic in order to justify this production and sell these doses, which is why the risk, incidence and severity of swine flu are being inflated.

Live vaccines are used when there are inadequate supplies of inactivated vaccine. The live vaccine has been weakened by growing the virus over and over again in a cell culture so that it has less disease-causing capacity. It is common for people to develop flu-like symptoms after being inoculated with live vaccine, and those symptoms include runny nose, congestion, tiredness, fatigue, headache and cough. Some individuals actually become sick as a result of inoculation with live virus and then are capable of transmitting the virus to others. The transmission rate has historically been between 1 and 2.4%. If only half of the individuals in target groups for vaccines are vaccinated, a 2% infection rate would result in over 1.5 million people contracting swine flu and becoming contagious. This could mean that the national campaign to vaccinate Americans actually could cause the epidemic!

Aluminum is the only currently approved adjuvant for vaccines. Adjuvants are added to vaccines to increase their efficacy by stimulating the production of more antibodies. This stretches supplies of vaccine when demand outpaces available supply.

The FDA has stated that the first vaccines will not contain adjuvants, but the government has ordered 119 million doses of oil-in-water adjuvants which will contain squalene. Squalene is a natural substance produced by the human liver; it is also found in shark liver oil, some vegetable oils, cosmetics and various nutritional supplements. Squalene adjuvants have been found to increase the risk for chronic inflammation and autoimmunity in susceptible patients who already suffer from inflammation and autoimmune diseases. There have been no studies examining safety for these populations.

The FDA has never approved the use of any vaccine containing squalene. It is likely that the normal approval process will be bypassed since the FDA can approve unlicensed drugs and additives whenever a public health emergency is declared.

Live virus vaccines do not contain adjuvants. So, patients are faced with two bad choices - live viruses that increase the risk of developing swine flu, and inactivated vaccines that may contain dangerous adjuvants.

Thimerosal will be added as a preservative in multi-dose vials of most inactivated H1N1 swine flu vaccines. The FDA has stated that there will be a small supply of individual vaccines that will not contain thimerosal. Thimerosal is also contraindicated for those who suffer from inflammation and/or autoimmune diseases. It should be noted that this population is much larger than most people imagine, since overweight people generally suffer from inflammation since their fat cells produce inflammatory cytokines. Most Americans are overweight, placing them at increased risk from vaccinations containing both adjuvants and thimerosal.

In spite of the history of harm from flu vaccines, the risks of infection from live vaccine; the health risks from adjuvants that are likely to be added; and the lack of testing for safety, particularly since people are being advised to get two flu vaccines this year; the drug companies are not liable for harm to Americans resulting from flu vaccines. The reason is that in 2005, Congress passed the Public Readiness and Emergency Preparedness Act, which eliminated liability for drugs produced in response to public emergencies declared by the Department of Health and Human Services or the Department of Homeland Security. This provides additional incentives to inflate the size of the affected population. Sales increase and liability decreases if there is an epidemic leading to a public health emergency declaration.

The groups who will be targeted first for vaccination are school children, pregnant women and health care workers. Some health care employersmay try to mandate that their employees receive the vaccine. The laws governing this situation vary from state to state.

Our legislative director, Sara Donlon, will be hosting two conference calls to discuss this issue on Monday October 5 at 8:00PM Eastern and Tuesday, October 27 at 8:00PM Eastern. Sara will review which states have passed legislation allowing vaccination mandates, in which states legislation is pending, how these laws can be changed, and what to do if faced with such a mandate. These calls are open to everyone and you can register by calling our office at 614 841-7700.

Should you get either of the flu vaccines? I have been advising against flu vaccines for years. I don't get them myself. I think the risks associated with getting the vaccines exceed the risks of getting the flu. I'm planning to stick with dietary excellence and optimal habits and stay away from health care professionals with needles!
Posted by Gretchen at 5:37 PM 0 comments

The Fall Garden is underway 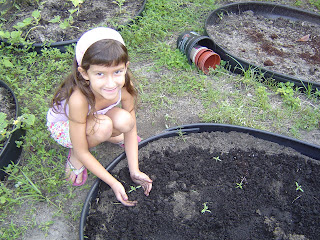 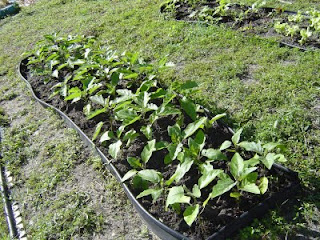 Okay, I can take no credit for this garden! It is completely my husband's and oldest daughter's work. For the past month they have been busy digging up dirt in the side yard to make way for rows of Eggplant, Corn, Squash, Lettuce, Cabbage and Spinach. Some of the Eggplant planted earlier this summer has already been harvested. I am looking at my favorite blog, Fat Free Vegan, for recipe ideas for tonight's dinner!

I think the Roasted Ratatouille looks good. I'll post photos if I get around to it tonight.