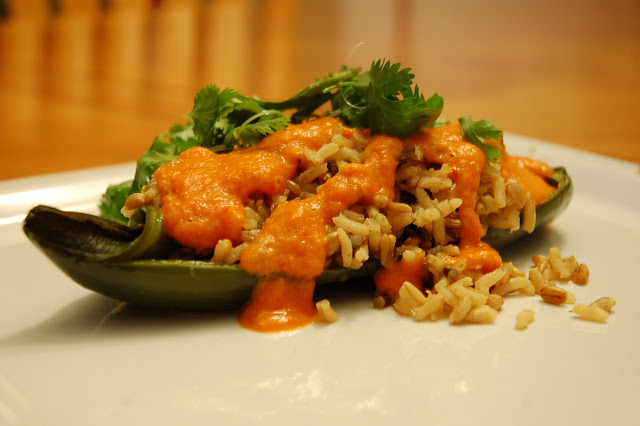 Nothing here was from our garden, but boy these peppers are really YUMMY!  I have blogged about these previously under "The Worst Thing We Ate Last Week and Then Came Monday Scones" but didn't put a recipe with it.  Gotta love the title of that post!  And it looks like I sprayed them with oil last time, but it's not necessary.

As I mentioned before, I originally got the idea for the recipe from my Sister In Law who got the idea from the Food Network Show "Throwdown with Bobby Flay".  Of course his version was not vegan.

I have since made some changes to the sauce to make it a little less fattening.  Served with salad these make a super easy and delicious weeknight meal.

Serves a Family of 4

Ingredients
6 Poblano peppers
4 Red Bell Peppers
2 packages cooked Seeds of Change Brown Rice Pilaf (I used only one packet of the seasoning for both packages of cooked rice)  Alternatively you can cook your own brown rice in low sodium veg broth or no sodium stock.
Cilantro (for garnish)
1/2 can of light coconut milk or 3/4 cup of unsweetened organic soy milk (room temperature)

Directions
Place Poblanos and Red Bell Peppers under the broiler until lightly charred and soft. I put them on a non stick baking sheet. Take them out of the oven and remove any major pieces of char (unless you like that stuff, but realize that it ages your body :-/).

Cook pilaf according to box directions, adding only one packet of seasoning to keep sodium down.    While rice is cooking you can start making the sauce.

Put your red bell peppers into a high speed blender along with the coconut milk.  Blend until smooth and warm.

When the rice is done, stuff your Poblanos with the rice and then pour the sauce over the top! Garnish with chopped cilantro if you like.  Super easy and super yum :)

Pair this meal with a green salad or bean salad and you have a healthy, delicious and quick weeknight meal!
Posted by Gretchen at 12:21 PM