Chili made from Eggplants in our Garden 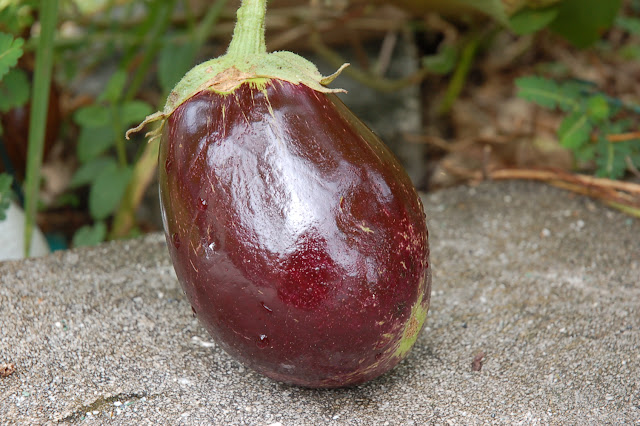 We are harvesting a lot of eggplants from our garden at the end of summer.  Since we can't really eat them raw, (or at least I don't want to eat them raw!),  I've been perusing all of my recipe books for easy dinners with eggplant.  I came across this really good one in Appetite for Reduction by Isa Moskowitz and it was a hit...at least for my husband who went back for two additional servings!

Aside from the intial chopping of veggies, it really comes together without much effort :) 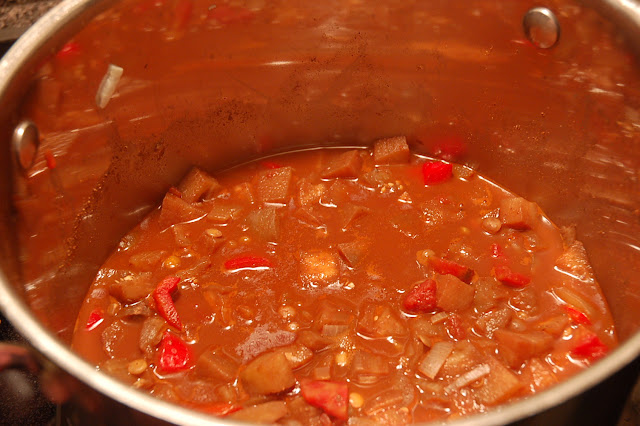 Preheat a 4-quart pot over medium-high heat. Saute the onions and bell pepper in the oil until translucent, 5 to 7 minutes. Add the garlic and saute for another minute, using nonstick cooking spray or a splash of water if it's sticking. Mix in the chili powder, cumin coriander, oregano, cinnamon, and salt.  Add 1/2 cup of the vegetable broth and the cocoa powder, and cook for about 1 more minute while stirring to dissolve the cocoa.

Add the lentils, remaining vegetable broth, diced tomatoes, and eggplant. Cover the pot and bring the mixture to a boil, keeping a close eye on it. Once it's boiling, lower the heat to a simmer and cook for about 40 minutes, until the lentils are tender and the eggplant is soft.  Mix in the agave. Taste for salt and seasoning.

Let the chili sit for 10 minutes or so for maximum flavor. Serve garnished with cilantro, if you like.
Posted by Gretchen at 11:55 AM