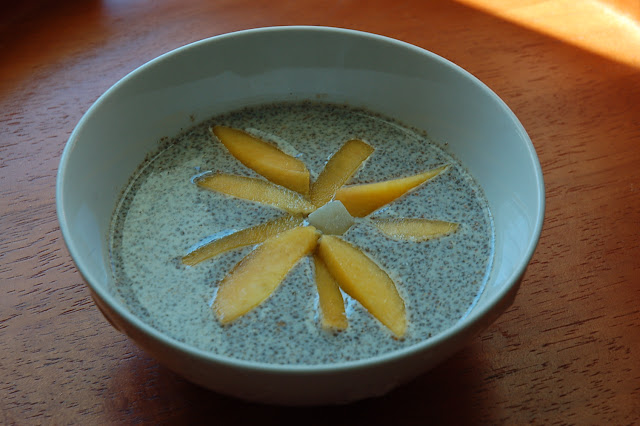 Summer is approaching here in Florida, so we are starting to crave more cooling meals (at least for breakfast and lunch).  I've been experimenting with Chia seeds for the past few months after coming across a brand of milled Chia seeds that did not need to be refrigerated.   For years I was using flax seeds but Chia seems to have a higher nutrient profile that packs in protein with less fat.  So I've been adding Chia to my oatmeal, smoothies, hydrating them with juice and drinking them, and using them as an egg replacement in baked recipes.

Then along came a blog post from a blogger friend, Julie Cove, at Alkaline Sisters where she featured a beautiful Chia Breakfast Porridge.  I have tried to make a Chia Porridge in the past and didn't find very appealing. I figured out from Julie's recipe that I was not adding enough milk.  The seeds were coming out partially hydrated, so the porridge was very crunchy and actually caused me to have stomach cramps.

Well, now I love this porridge!  We were having it every day with whole Chia seeds until we ran out. Now Whole Foods is out of stock in their bulk section and in their Nutiva brand bags, and they are saying there is a shortage of supply, so they cannot say when they will get more!  Wow!

It figures the day I want to photograph the Chia for my blog, I have to use milled Chia. Well, I thought the milled version was okay, but my kids didn't like it.  They said it was mushy. So, you will want to try this with the whole Chia seeds first.

So here is my simplified version of the Alkaline Sister's recipe:

Ingredients (for one serving)

Pour milk into a small bowl and then add the and other ingredients.  Stir with a small wisk for at least two minutes so that the chia begins to hydrate but doesn't become clumpy.

Set in refrigerator for 2 hours or overnight.

This can be enjoyed as a breakfast OR add more sweetener and enjoy as a dessert!
Posted by Gretchen at 10:34 AM

Yum!! This looks like a delicious and hearty breakfast!

Thanks for your comment Becky! It's really a nice change from the usual "healthy breakfast" like green smoothies or steel cut oats. And super easy so long as you remember to put it together the night before. I hope you will give it a try :)

So, what's the consistency like? Is it like "eating" milk with a spoon, or does it thicken up or....what?

Just bought chia for the first time yesterday (the Nutiva is back in stock at Whole Foods!) and made something similar to this for breakfast. I loved it, but I'm going to try your recipe for the kids tomorrow since they'll like it better with a little sweetener!

Tasha, it thickens because the seeds soak up the milk. But if you want it thicker you can just add 1/8 cup less milk...cutting the milk ingredients will produce a denser texture but then you can also get crunchy chia seeds which are not so appetizing.

Jessica, make sure you only buy the whole Chia seeds from Nutiva. Their ground Chia is ground similar to ground flax, only ground chia is far less shelf stable than ground flax. If you want to buy ground Chia, get it from http://www.runningfoood.com It is the best price and they use a proprietary process that is the same as the expensive Mila brand sold through MLM.
You can get the whole chia seeds in the bulk section from Hoover's too.