First Use of My New Dutch Oven! 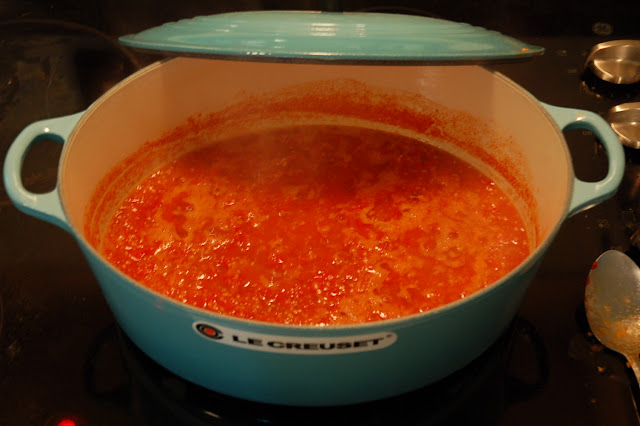 As you know, I won a new Le Creuset dutch oven at the Orlando Food Blog Forum a few weeks ago.  I have found several dutch oven recipes I want to try this month, but I needed to do something with four pounds of cherry tomatoes from our garden ASAP. So I decided on a simple, fat free, low sodium Cherry Tomato Sauce.  And the dutch oven is perfect for this because it is non reactive with the tomatoes.

All I did was add a finely chopped onion to the pan with two Rapunzel Vegan Broth Cubes and 1/4 cup water.  Then I added 4 cloves of crushed garlic and the washed and lightly blended (in my Vitamix) cherry tomatoes.  I brought them to a boil and then cooked on low heat for probably an hour and a half.  I seasoned with 1/2 tsp of salt since we do low sodium.  The recipe makes about 3 cups of sauce.

These cherry tomatoes had a ton of little seeds.  My husband and I didn't mind them but the kids were not enthusiastic.  My oldest daughter thought the seeds made the sauce bitter and my youngest thought there should not be seeds in spaghetti sauce, so I guess I need to figure out how to strain these seeds the next time I make it.

Anyone have any ideas for me?

If you're lucky enough to have a vita mix it will crush those seeds.

But then I wonder if it will completely remove the texture? I will try it, thanks Kathy!

You are so lucky. I was practically salivating in hopes of winning. Congrats.

Kim, I was so thrilled to have won it! They greatly increased the number of giveaways compared to last year, so I'm guessing next year we will all have even more chances to win :)