Review of the book "Meatless" and BOOK GIVEAWAY

I have been provided complimentary copies of the book "Meatless" by the publisher of Martha Stewart Living.  I only review books and products that I think my followers will have an interest in and I will always give an honest review. 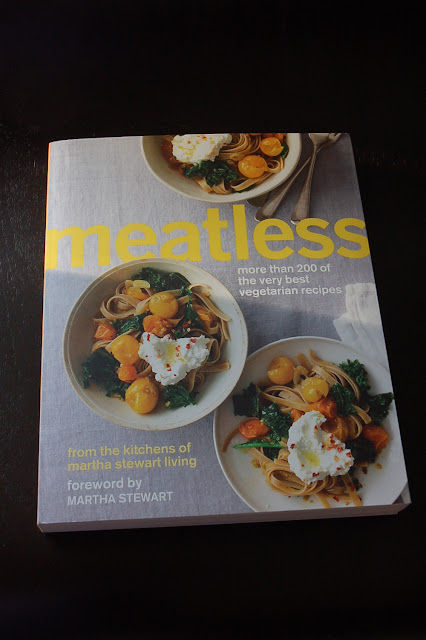 For the past three weeks I've been cooking from the book "Meatless" by the publisher of Martha Stewart Living, with a promise to the publisher to give my honest review.  I was somewhat hesitant to take on this project because the book is primarily filled with Lacto-Ovo vegetarian recipes, and well, this is a vegan blog.  But I wanted to give the book a chance because I think it's huge that Martha Stewart has her name on a cookbook that has no meat in it!  Can we all just stand up and give her a round of applause?!  Seriously people, this is HUGE.

Upon opening the book, I was excited to see that there was a beautiful color photo for every single recipe.  There's a wide variety of dishes catagorized as "Small Plates to Mix and Match", "Stovetop Suppers", "Soups, Stews, and Chili", "Casseroles and other Baked Dishes", "Substantial Salads", "Sandwiches, Burgers and Pizzas", "Pasta and other Noodles", and "Simple Side Dishes".

I appreciated the many gluten free recipes, though I did need to modify a bit on the oil and dairy. The ingredients were easy to find and the recipes simple to follow.  The serving size and macronutrient information are all there, but I would have liked to have had a notation about the total time from start to finish.

If your family has been "eating clean" or tossing around the idea of giving up meat at least one day a week, this would be a great guide.  If you are a seasoned vegan or vegetarian cook the book may or may not give you some fresh new ideas but it's worth a look.  I didn't find that the recipes pushed vegetarian cooking to the edge like Isa's Moskowitz's recipes do, but it definitely has it's place in the mainstream world of new vegetarians or new plant based eaters. Again, I give Martha and her staff a big high five for recognizing that palates are changing, and for the better :-)

Below is the Versitile Vegetarian Chili on p. 146.   The basic chili has 10 ingredients, but there are suggestions for toppings (I chose raw corn and avocado), varying the beans, changing up the vegetables, using tomatillos in place of the canned tomatoes, and broiling the veggies to maximize the flavor. 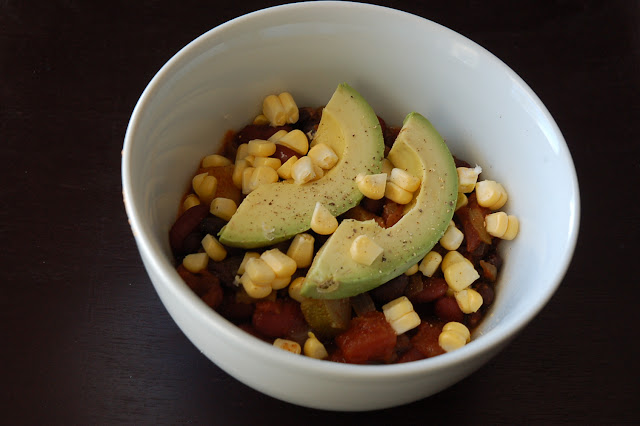 This is the Roasted Beet-Garlic Soup on p. 142.  I love me some Borsht soup, so this was not hard to make and eat.  The only thing I did wrong was to not roast the garlic in the oven, I simply pan sauteed it because I failed to read ahead in the directions and had a time constraint for getting this one done.  I think roasting it is necessary to give it the depth of flavor.  It was still very good!  My kids enjoyed it too, but they aren't picky eaters so that's not saying much. 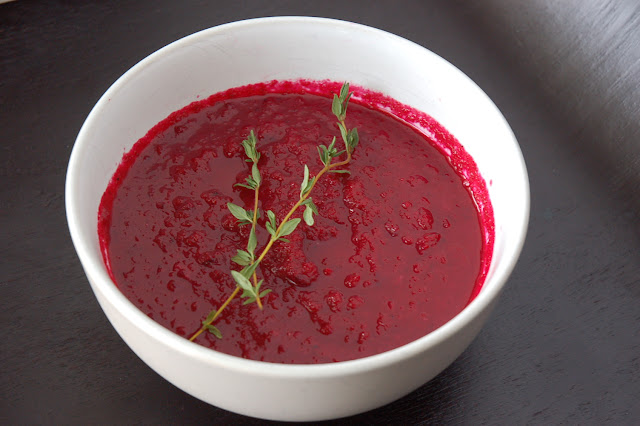 I was at Whole Foods to buy the veggies for the ratatouille and mentioned to one of the employees what I was making.  I got a nice story about how he worked on a farm one summer and there was always lots of fresh tomatoes, so he made ratatouille several nights a week and never got sick of it. And since then it has become his "favorite meal".  I almost felt as if I needed to extend him an invitation to dinner!

I had not made Ratatouille in years, so I had forgotten how wonderfully simple it is to make.  I think the Roasted-Vegetable Ratatouille on p.141 one will become a regular in my meal plan rotation. 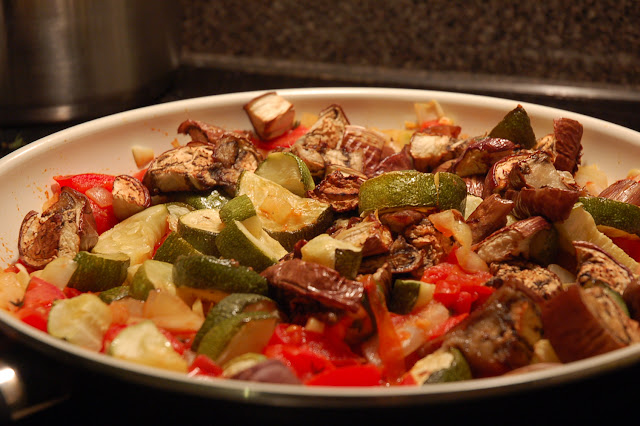 It's not a big surprise that we are big ethnic food eaters at our house since my husband was born and raised in India. So, of course I had to make the Curried Red Lentil Soup with Dried Cherries and Cilantro on p. 126.   Vineet insisted on serving his over Basmati rice and adding mango pickle.   He ate two bowls of it- a sign that his Indian palate enjoyed it.   I have made similar soups but never thought to add the cherries (well I used cranberries) but it does add a nice dimension to the soup!  And I like the idea to drizzle the coconut milk for garnish.  Not my best photo, but you get the idea... 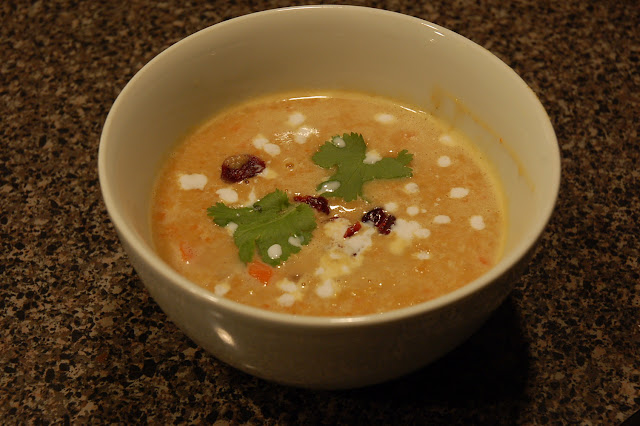 This is the Chickpea Curry with Roasted Cauliflower and Tomatoes on p. 133.  I have made many a curry with cauliflower but never had I thought to use roasted cauliflower.  Roasting cauliflower gives it an almost buttery/cheesy taste.  We had purple califlower growing in the garden, so that's what I used here.  This one is also a definite keeper! 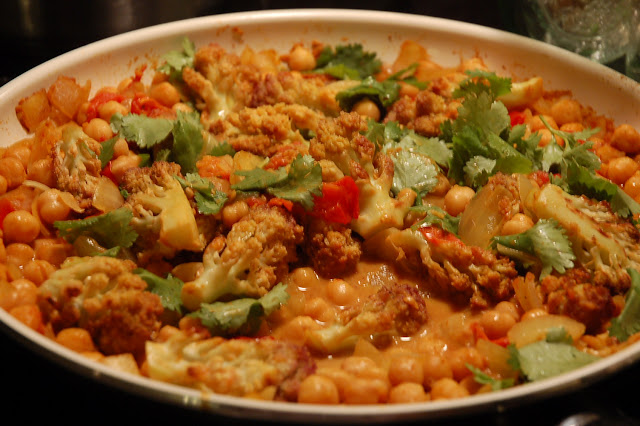 Lastly, the Zucchini-Ribbon Lasagna on p. 155 was made with both zucchini ribbons and gluten free noodles.  I ran out of zuchini, so I had to improvise.  I thought this one lacked a bit in flavor when I compare it to Isa Moskowitz's lasagna recipes.  I think making the tofu into a ricotta with cashews and spices would have helped make the dish more flavorful.  Still, we did enjoy this one. 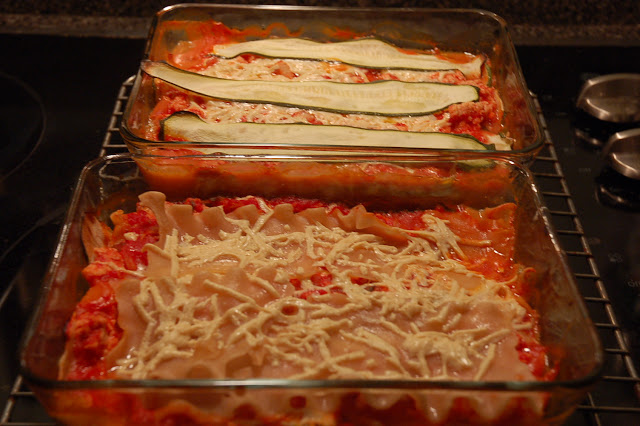 Also, I am giving away a copy of Meatless!  All you have to do is comment below on which recipe you'd like me to get permission from publisher to print here on my blog! You can follow me on FaceBook and also enter the contest there. I will randomly select a winner using random.org.  Good Luck :)
Posted by Gretchen at 9:03 AM

Great review! I'd love for you to get permission to print the red lentil soup.

Great blog Gretchen! I have been eating many more vegetarian dishes and I look forward to making some with my son. So I may seriously consider this book. I would love to see the recipe for Roasted-Vegetable Ratatouille. Thanks for the post! - Chris Robinson

Either the Curried Red Lentil Soup with Dried Cherries and Cilantro or the Chickpea Curry with Roasted Cauliflower and Tomatoes. Yum Yum!!

Thank you Aradria, Chris and Monika for taking the time to comment and enter for the free book! Chris, glad to hear you are eating more veg :)

I'd love the roasted beet & garlic soup! I'm always trying to find ways to incorporate beets in my diet.

I'd love to try out the roasted beet & garlic soup recipe! Your blog is awesome!

I love to see the Roasted-Vegetable Ratatouille recipe as my family & I are a big fan of the movie and would love to learn how to make this seemingly yummy and delectable dish! :)

Personally I am always looking for a good vegan chili. I vite for the Versitile Vegetarian Chili.

Thanks for your comments Christine and AlohaMolly! Good Luck!

Of the recipes pictured, I'd definitely choose the Chickpea Curry with Roasted Cauliflower and Tomatoes! Roasted cauliflower is sooo good! ceevegnashville [at] gmail [dot] com

Thank you so much! I was excited about this cookbook but have recently made the shift from vegetarian to vegan. So glad to see what you have cooked from it!

I would LOVE the red lentil soup recipe. :)

Ratatouille! Now that my daughter has gone vegetarian, I am always looking for quick and easy dishes that fit our busy schedule! -Radonda

I heard about the book, but have yet to look at it. The pictures are making me hungry. The recipes seem easy enough to make.

Chickpea Curry!! I love everything curry after having spent two summers in India!

Melissa, what parts of India did you visit? We go every 2 years, but mostly visit the north. You can see a snippet from our 2011 visit here: http://www.whatahealthyfamilyeats.com/2011/11/what-healthy-family-eats-in-india-again.html

I really want to see the west and the south this year.

Curried red lentil soup sounds delish! The best cookbooks are the ones with pictures of all the recipes.

I'd really like to see the Curried Red Lentil Soup with Dried Cherries. I hope you're able to share that recipe.