What A Healthy Family Eats in India this month

I've been away from the blog for most of October due to being in India!  Yes, again, already!  We made a last minute trip to check in on my Father In Law, who's health is declining.  We also thought it would be nice for the kids to spend the Diwali (Indian New Year) with their grandfather, should it be his last.

I have some photos to share of our visit so far, some food related, some not. Unfortunatley I am having a bit of trouble uploading photos to blogger, so I managed to only upload one photo after trying several times for two days!!

Below is a photo of my meal on the our Lufthansa flight from Frankfurt to Delhi in case you were wondering what a vegan meal looks like on an international flight.  The yellow patties were polenta...I think.  At least that's what it tasted like :) The gelatin was made with agar agar.  There was an interesting veg based spread for the white dinner roll.  I had to try it even though I really hate white bread!  It was good, I could have had it on some rice crackers instead.

Airplane food is never exciting, but I like the fact that vegan meals are an option.  You do need to call ahead or let the travel agent know when you are booking the flight. 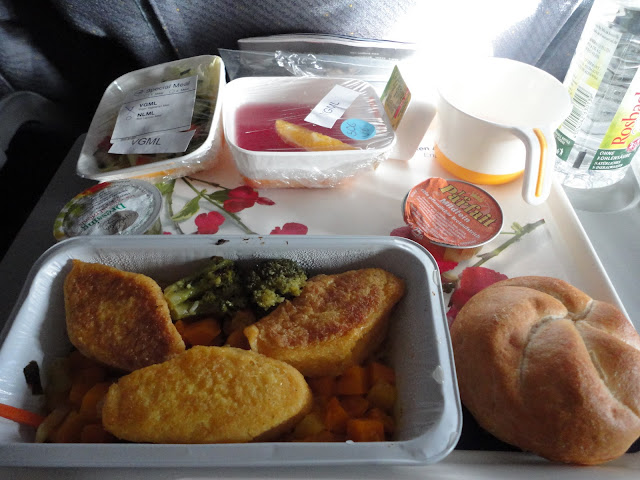 More photos and stories are coming as soon as I can get the uploading part to work!
Posted by Gretchen at 7:10 AM