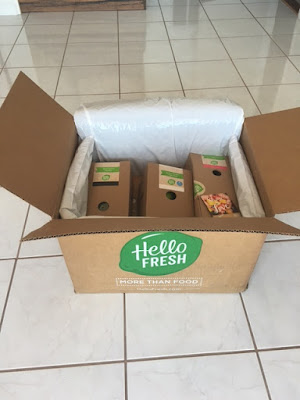 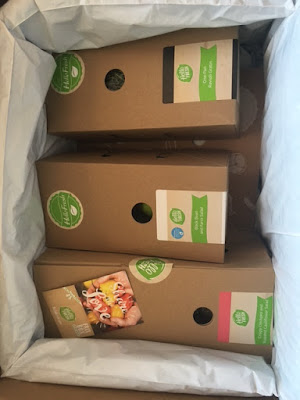 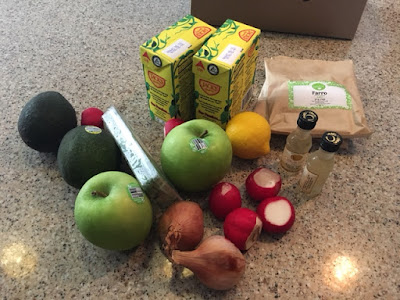 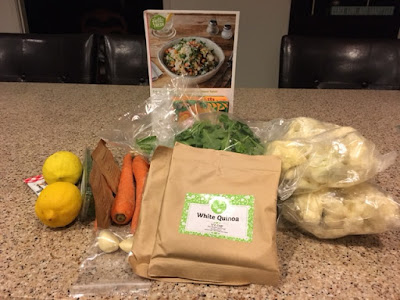 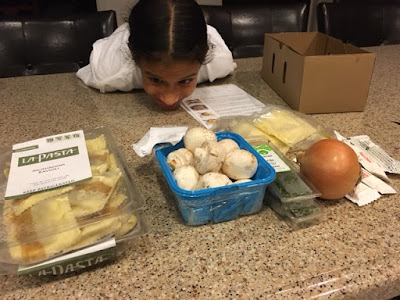 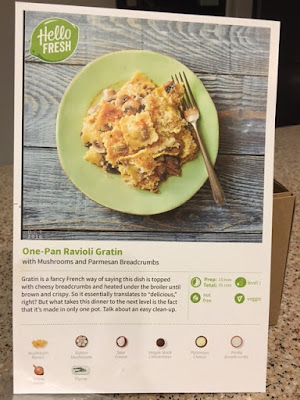 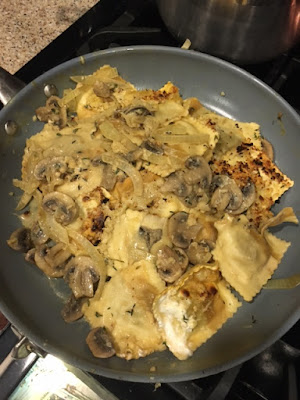 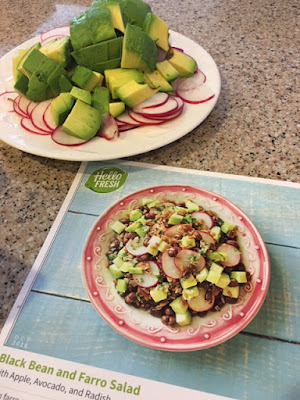 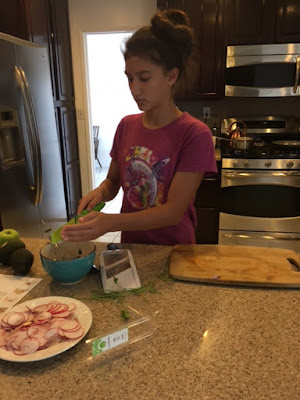 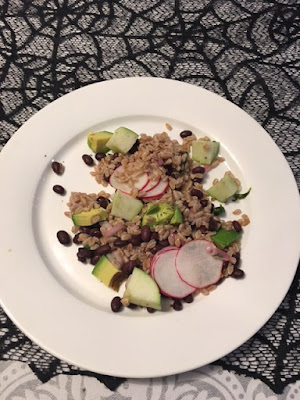 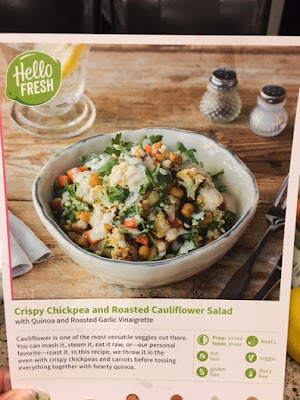 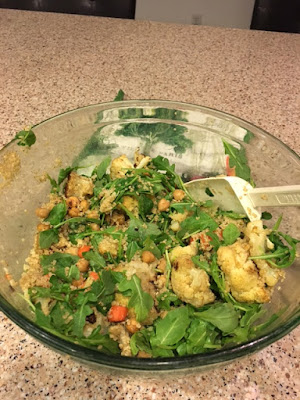 Posted by Gretchen at 2:36 PM 6 comments

Vitamin C and other therapies for Pneumonia

In May of this year, my 10 year old daughter came down with a really bad virus...right before her birthday.  It started with vomiting and coughing and led to a high fever of 103.  It went away within 3 days but then came back again exactly 7 days later.  But the second time around, I feared pneumonia was coming on. (She had pneumonia when she was a toddler, so the symptoms were all looking familiar). Her cough was heavy and full of mucus, and she was very lethargic and listless from the high fever.  She started to feel sick on a Saturday afternoon, so I had to make it through two days until I could get her in to see her doctor.  I did not want to make a trip to the Urgent Care clinic unless it was absolutely necessary.

These are the things we did to help her body recover completely:

1. Intensive doses of Vitamin C.  I only had access to oral vitamin C, and I could only get my daughter to take 2,000mg at a time, 3 times a day.   I used the Trader Joe's Brand Vitamin C Gummies and Chewables. It's best to use non-GMO or Organic brands. The gummies are probably better for smaller kids to handle in their mouth. If you are not familiar with why our bodies need Vitamin C, you can listen to this lecture by Suzanne Humphreys.

Within 48 hours of my daughter taking increased doses of Vitamin C, the fever had broken and her temperature came down to 99.  The very next day at the doctor's office, her oxygen levels tested normal and her lungs sounded completely clear through the stethoscope.

.  These really are so much better than a nebulizer.  For one, it is almost silent.  The nebulizer we had was extremely loud.  You can adjust the temperature on the MyPurMist to make the mist warmer.  We had my daughter use it every 4 hours during the day and it helped to make her cough more productive.  It has an automatic cleaning cycle, so after it is used it is completely sanitary for another family member to use.

3. "Back Tapping".  Directly after using the steam inhaler, we did "Back Tapping" to loosen up the mucus in her lungs. I would have her lay on a reclining chair with her arms crossed over her chest and her head and chest at an angle lower than the rest of her body.  As I tapped her back with my hands cupped she would cough mucus up into a bowl. I know...that sounds yummy!

4. Lots of fluids with electrolytes.  Coconut water is the best fluid for hydration!  Make sure you check the label that you are getting 100% pure coconut water and not "flavored" water.  Some brands add flavoring, and then you have to wonder what is hidden in the flavoring.

5. Sea salt inhaler.  You can buy a sea salt inhaler or make your own.  Basically you want to have large crystals of pink Himalayan sea salt, so that when you breathe in the air above the salt, you don't inhale salt granules.  You can put the salt in a small jar and put your mouth over the opening of the jar and take a deep inhale, then exhale from your nose.  The salt is cleansing for the lungs.  It helps to speed up recovery of congestion and improve breathing.

Prevention
We continue to give my daughter 500-1,000 mg of vitamin C per day for preventative purposes along with Juice Plus. Of course, we also make sure she is consuming plenty of fruits and vegetables.  I now feel more confident that if she gets sick again, we have an established plan in place to get her to recover quickly. I hope this helps anyone who finds themselves in a situation where they cannot get in to see a doctor right away.  You cannot give too much Vitamin C to a child or adult.  It is a water soluble Vitamin and their body will excrete whatever they can't use.  It's better to give too much than not enough, especially during an acute illness.

Disclaimer: This article is for educational purposes only.  It is not intended to provide medical advice, diagnosis or treatment.

Posted by Gretchen at 9:14 PM 0 comments

About a month ago I ran across some videos on YouTube by Veggiecation.  I found it interesting that the classes being taught in the videos were similar to what I used to teach when I was teaching nutrition classes for kids.  Anyway, they are trying to build their network of teachers and are offering a training workshop every month to certify new teachers.  You get a kit of supplies, posters, recipes, basically every thing you need to run a class on healthy eating for kids.

You can get 10% off this month by using this code: TastyLife2015 and going to the website at veggiecation.com.  The workshop is actually tomorrow starting at 7:30pm, but if you are reading this after the start of the workshop you can email them and let them know you saw the discount on my blog and see if they will give it to you for the next training!

Posted by Gretchen at 1:46 AM 0 comments

Since moving here almost 2 years ago I haven't done much with restaurant reviews.  We've been to the The Naked Cafe in Solana Beach a couple of times.  It sits directly across from Fletcher's Cove Park on the beach, so you can see the ocean from every seat in the restaurant.  It's also very affordable and the wait has never been more than 15 minutes, making it the ideal place for a family of 4 to have brunch on the weekend :-)

My kids first response when they heard the words "Naked Cafe" was "do we have to be naked to eat there"?   Ummm, no!  Naked in this case means they are using fresh, mostly organic ingredients, no preservatives, and cooking most things from scratch.

Besides these cute little bear face pancakes, they offer a wide variety of healthy breakfast options with eggs and veggies, salads, a rice bowl, fresh baked bread, and a variety of herbal teas and coffees.  I shared a large fruit plate with a friend and my husband had a breakfast burrito.  This is my kind of restaurant.  It's not too far to the super health nut side.  It's in that comfortable place where we can all find something to eat and not be hungry afterwards.

If you ever find yourself in San Diego, I highly recommend it! 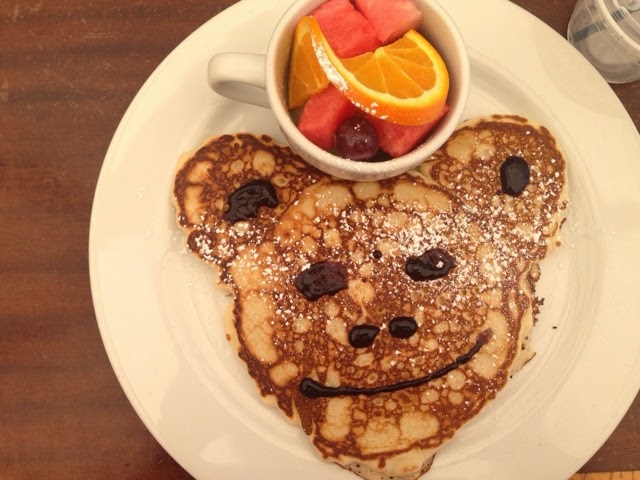 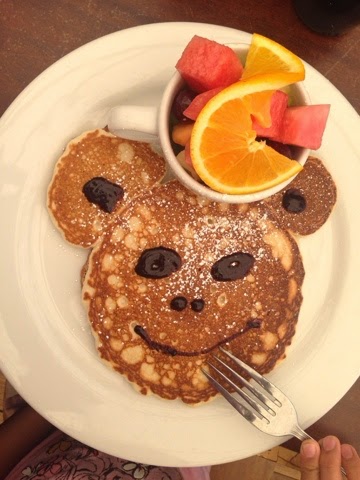 Posted by Gretchen at 6:54 PM 1 comments